This page gives a description of the History of the Likpas, such as they know it at the end of the First Cycle. It is not necessary to read it, but it is useful to place the stories which follow, which take place at very different epochs and contexts. Don't hesitate to check it each time thou needest to know at which epoch the story thou arst reading is taking place.

To read the stories, use the NAVIGATION BAR on bottom of the page. See smaller images. See larger images.

Summarized history of the World of the Gentle Likpas

The land of the Gentle Likpas and the land of the Gentle Boobettes are in the south of a large island, while the Phallo's town is in the north. Many centuries ago, there were only Phallos, but the Likpas appeared little by little, until they were numerous enough to make the Revolution and shake off the Phallo's oppression. But the Phallos were still much too unbearable to live with, so that the Likpas ended to create their own country. The town made them the Phallo's War, and at this time was discovered a second island, the one of the Rastalikpas. And the Rastalikpas had the same legends than the Likpas: a marvellous epoch before the Phallos, where lived immortal Likpas who were all sons of a mysterious «GREAT MOTHER» at the origin of every life on their planet. The scientists came with a confirmation that life appeared on their planet only some thousands years ago. This is the mystery of the origin of the likpas: Who was this MOTHER? A goddess? A queen? A fabulous living being? And how could She create every life? There is only little time left to find the answers, as, inexorably, the climate changes, and children taking birth today will not die from age, but from freezing... 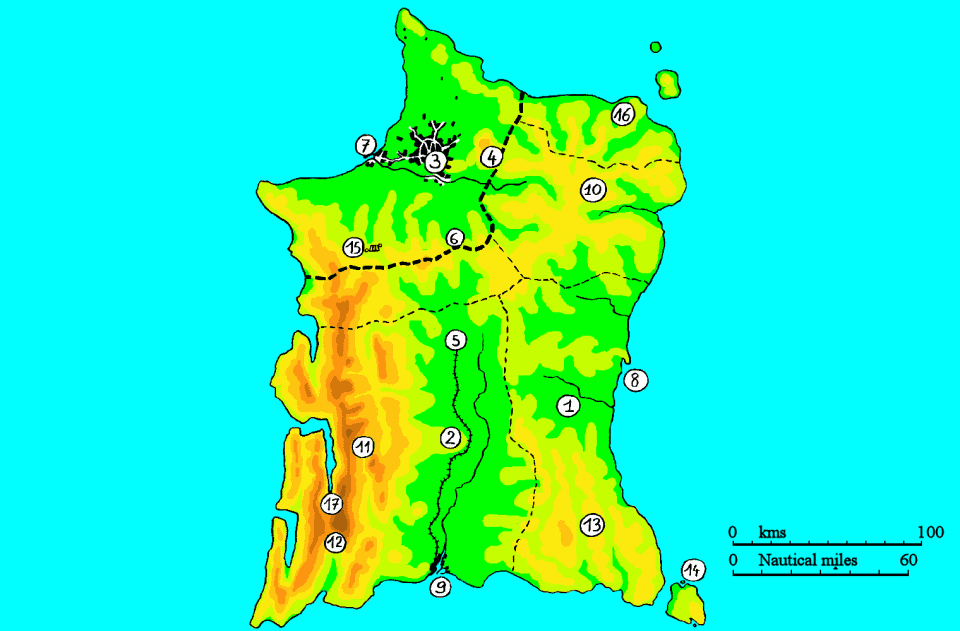 It is a nice and large island on a planet all covered with oceans.

(2) The land of the gentle Boobettes

(5) The Mead of the First Meeting

(6) The no trespass line, authorized limit for the town (with the checkpoint Charlik)

(7) The harbour for the town

(9) The harbour of the gentle Boobettes.

(10) The blueberries hills, not really allowing for farming, not inhabited. This zone is forbidden by the ULO, because of the uranium mines.

(11) The Shadow of Dusk Mountains, in short The Shades, desert region of nice rocks and forests, where the gentle Boobettes love to treck.

(12) The Breasty Mount, higher point of the map, snow-capped.

(13) The Copper Hills, very nice land with coloured rocks and freaky things belonging to the likpas.

(14) The secret island of the likpas!

(16) The country of the occitan likpas

(17) The secret smithies of the gentle Boobettes 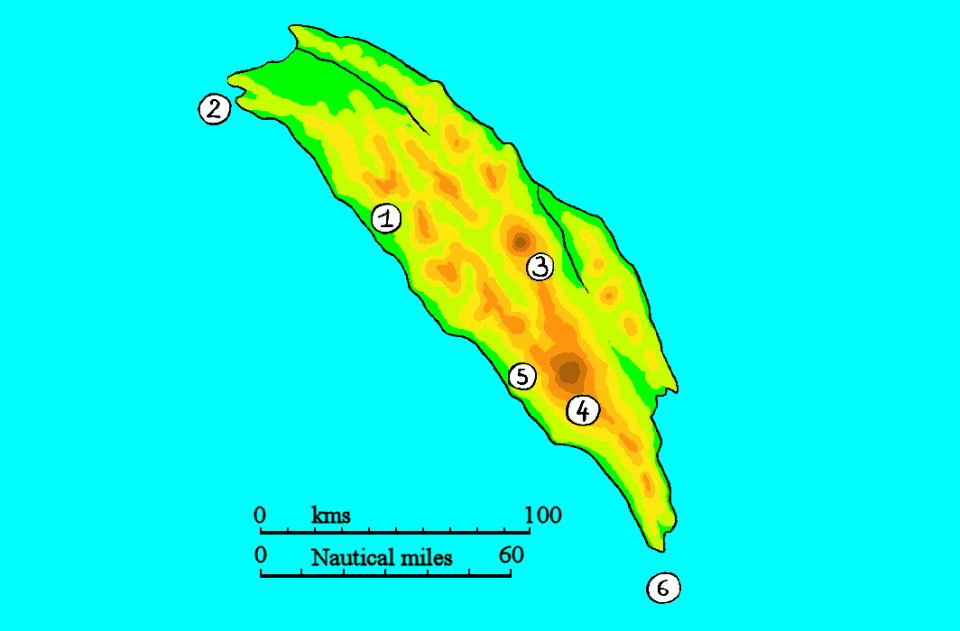 The Jamalika island, discovered during the Phallos War, is smaller than the Likpa's island, and is about one thousand kilometres in the south-east. It is covered with mountains, and, in former times, with a magnificient forest of trees called flaming trees, because of their beautiful flowers, and which provided their food to the Rastalikpas. Now, with the climate change, the flaming trees are improductive, enforcing the Rastalikpas into work and having a classical farming.

(2) The colonial town and harbour of the Phallos

(4) The mountain which also smokes pretty much when it fancies of.

(5) The walking stones and swimming stones (used for glass jewellery)

Yes, the Likpa calendar works in the reverse of ours: the zero year is in the future, so they uncount negative years, as if on Earth the first Romans had used the Christian calendar. Difficult? Not really. Train not to always likpate things in the same way.

Yes you will ask, good, but how the likpas do to know the future dates? They know all, and until now there was no mistake. Heyhey, I shall not tell it now, please read the stories!!

Note: according to ongoing historical researches, dates or events may change.

The prelikpatic times were for long only a subject of controversial legends and uncertain lore. However, the discoveries of Jamalika and especially of modern science, were alway confirming the wildest tales, especially the incredible appearance of life on the burning Likpa's planet. However no explanation was found yet about the drastic climate changes which allowed this appearance, just some millenia ago, and especially not about this incredible story of the creation of the Likpas by the GREAT MOTHER, and what this Great Mother could be.

-9000 Likearth is a planet without life, with a temperature of 80° and a deadly carbon dioxid atmosphere. It is however at this epoch that appear the first planctons, and then oxygen. The fall of the carbon dioxid produces the end of the greenhouse effect, making the temperature drop.

-2000 Supposed date of the appearance of the first likpas or phallos, thanks to the legendary Mother. Temperature 20°

The Dark Age and the Revolution

-1992 Start of the Rastalikpa calendar. Jah Rastafalik, Bobmarlik, Hailik and Wailik found Jamalika. Their record, thoroughly preserved through ages, confirms the existence, at this time, of a community of immortal Likpas «Children of the Mother», living around Her. They were were attacked by Phallos.

-1800 Slaughter of the last Likpas of the Oreal, of which the marvellous ruins were found at the time of the First Phallos War. Appearance of the craputalist regime and beginning of the Dark Age. 11th Phallo King, and first Phallo's historical records.

Until the death of the 13th Phallo King, the Phallo's town experiences a large expansion, and starts to build settlements in other parts of the island, such as in the Copper Mountains, in the Shades mountains, or in the Mouth (future place of the Boobette's harbour)

-1698 The Atheism War. The King Phallo 13, in order to repress religions, chases the Occitan Phallos from the Spooklik Mountain, toward their today land (The two Islands and the three Valleys) and arsons the Temple on the Spooklik Mountain. All the Likpas have their antennas cut, causing them a great suffering.

-1696 Appearance of the pukerats, a completely new species, which creates havoc in the Phallo's fields, causing a serious food shortage.

-1695 The Great Epidemics. More than 95% of the Phallos die of the Antenna Syndrom (AIDS), of which the king Phallo 13 is the first victim.

The Phallos, being now less than 5000, gather together in the town. The Great Epidemics will last for centuries, regularly dooming the town, before the virus becomes weaker. The Likpas reappear little by little, as the virus does only little harm to them. The Phallos have to make do with this situation, but they put the Likpas in slavery. Generous and libertarian ideas start to appear among gentler Phallos and emancipated Likpas. But the Phallos kings still keep an iron hand on the government.

-1392 First uprising of the likpas, crushed in blood. But their generous ideas survived...

-1367 Foundation of the Liksist-Breastist party for the liberation of the Gentle Likpas and Gentle Boobettes, more often known as «the Reds», because of the colour of its flag, red like the heart, with bearing a boob and a Likpa.

-1332 Legalization of the Red party. During years of clandestine strife, the Parti will be the hope of the likpas and gentle women. We owe it many more fair laws.

-1327 Abolition of the mutilation of antennas. However this ignominious practice still happens in secret today.

-1256 The revolution of the Reds is a triumph, imposing the democracism and limiting the powers of the kings.

The huge hopes and expectations of the Revolution are quickly dismissed, as the Reds soon become a parody of liberation, which hampers things rather that moving them. They propose more and more laws, but this is useless as it does not solve the bad mind of the Phallos and Scraguns. The town undergoes a great science and technical progress, thanks mainly to the Likpas. But the society is still locked in an unawowed racism of the Phallos against the Likpas.

-1184 The Great Likpa launches the Village of Happiness.

-1180 Repression of the Happiness Village, martyrdom and death of the Great Likpa.

-1113 The earthquake badly hits the town.

The Gentle Boobette's land and the Gentle Likpa's land start in very difficult material conditions, and in more they have to keep this secret. But thanks to the astuteness and industrinousness of the Likpas, they quickly develop the bases of agriculture and industry, together with and entirely original Likpa culture and a free society, where everyone do what is needed to do, accounting with his abilities. When the Phallo's repression starts, it is too late: the Likpas already are able to build rifles, the terrible schpoungasses. The Likpas develop an brillant and happy civilikzation, in sharp contrast with the sad town of the Phallos. They attract most artists, workers, technicians, engineers. The town has its progress stalled, but it still remains a serious threat. The town starts a war of skirmishes and raids, facing a more and more organized and efficient Likpa defence.

-776 First Phallo's War: the town attacks the land of the Gentle Boobettes. After an striking defeat, the town is assigned into the demarcation line, and since this time it is subjected to inspections against Mass Delikpatisation Weapons and against antenna mutilations.

-774 Liberation of the island of the Rastalikpas, the Jamalika. Fundation of the ULO, the United Likpas Organization, including the Town, Jamalika, the Likpa's land and the Boobette's land. The Occitans Phallos declare they are Likpas and join the ULO, this causing the demission of the town

-724 The likpas likpate their first satellik, to observe the other side of their planet, in search of the legendary Haralik island, of which the MOTHER is said to come from. The results were kept secret.

-721 The town started to rearm in secret. First refusal of inspections. On Earth, we were in 1997.

-714 Present moment of the main stories. On Earth, 2004. There is a strange ambiance in the likpa's land, everybody knows that the town is to start the Second Phallo War. But astrolikonomists suddenly censor all their activities, unexplained sounds are heard in the radios, strange rumours are spread, and the ULO behaves in an odd way, arresting innocent Likpas in the very Likpa's land...

-709 Second phallo's war, also named the War of Uranium. On Earth, 2009. This will also be a defeat of the town. This war will have incredible and marvellous consequences, that will be seen in the Second and Third Cycles of stories.

-583 Opening of the first decentration camps: the transformation of an ugly Scragun into a Gentle Boobette, or of a naughty Phallo into a Gentle Likpa, a rare phenomenon in former times, will become common, thanks to the powerful liberation methods of the Reds.

-325 Last uprising of the phallos, crushed in laughter. This will be the last violent episode in this world.

-69 Abolition of the dol and of the swork.

-0 The last Phallos and the last Scraguns will become Gentle Likpas and Gentle Boobettes, except for Jude the traitress, condemned to stay the only and last scragun for one more thousand years. Symbolic destruction of the last jails. An era of happiness and tremendous progress will open for all.