The funny Music Instruments of the Gentle Likpas

This is the story of the Walkin'Cocks, the famous likrock group in the town, which changed the life of thousands of young phallos.

To read the stories, use the NAVIGATION BAR on bottom of the page. See smaller images.

The beginning of the group «The Walkin'Cocks»

On this rare historical image, the Walkin'Cocks pose to celebrate their first contract with their editor Starchphallo, whom Inis Financials was the first stock owner. The well known bank, in its effort to educate the youth, had decided fo favorise a good styled popular music. It took a great care of the clothing and nice sort music. Also, the Psycho-Social Salubrity Comitee, of which the bank is a sponsor, had in charge the correct behaviour of the young spectators during the concerts.

Very soon, the success of the Walkin'Cocks allowed them to take control over the terms of the contracts, what they never hesitated to do. Their new style, lively and merry, made fans of a large part of the youth.

Here they are in the first opening of their great album «Sargeant Phallo Lonely Hearts Lik Band». This new style did a major scandal into the phalhomes, and the appearance of the new black guitar player made things still worse. We note that Phallo, at left, was already playing a pukerat. This album was featuring the very anti-establishment title «The bloody keen swaddies», a play of words that the Psycho-Social Salubrity Comitee understood only seventeen years later. We still don't know about the consequences of this affair, and probably nobody never dared to speak of it to the Queen.

The concert of every scandals

Inis Financials having at last stopped any activity into music edition, the walkin'Cocks immediatelly founded their own edition company. But to the great atonishment of all, they maintained their contract with the Psycho Social Salubrity Comitee, saying that their utility would appear during the concert. The scene was completelly filled with a huge crinkly structure with a disgusting colour, which showed to be an gigantic tromblard, that the musicians had very imprudently connected to the firemen's water pipes. The atrocious borborygm was heard in the entire town, and not a single window remained at less than three hundred metres. Rumours said that, if no casualty was to regret, it is thanks to a mysterious crowd control team, invisible but perfectly organized. The well known music group eluded any comment on this, just stating that a free youth knows to be responsible. 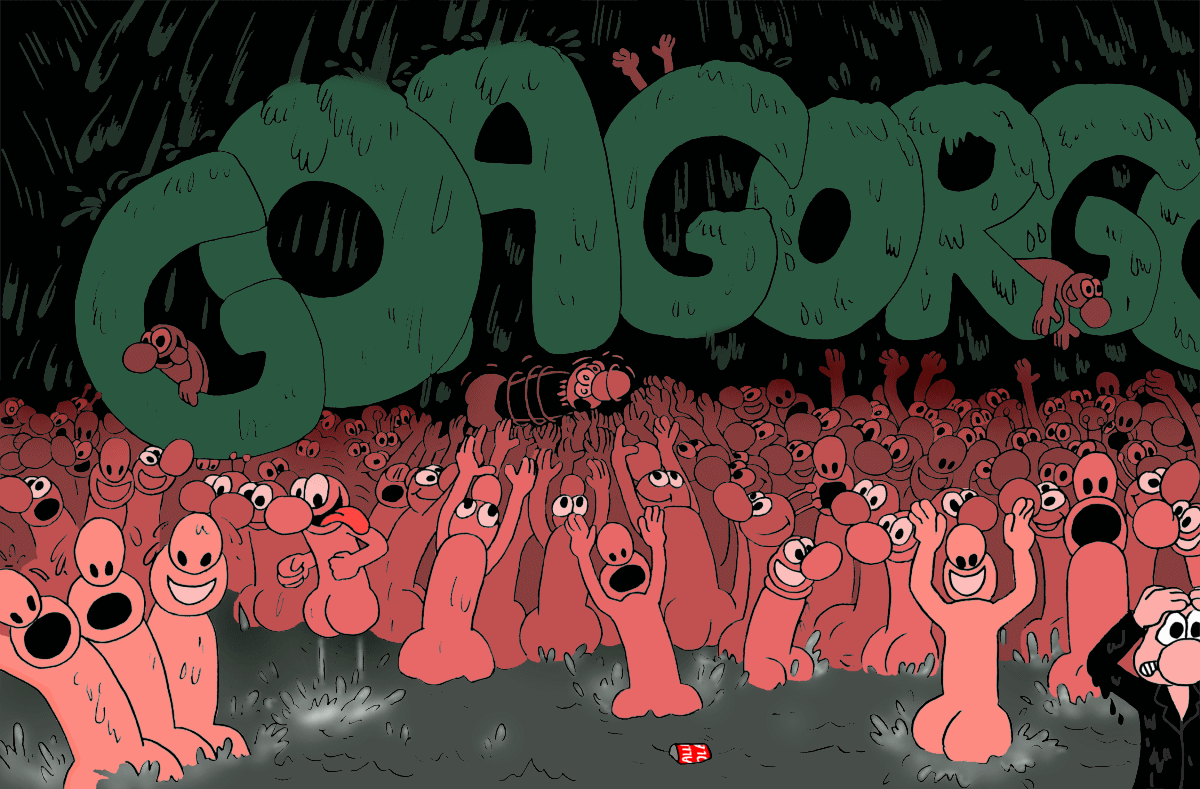 The breaking of the group!

The concert of the tromblard was the last of the Walkin'Cocks, who are now forbidden in every halls in the Town. The group then kept eighteen months silent, without any activity nor declaration. It was even difficult to join them, and one could note that they were now wearing berets. This silence was abruptly broken by Phallo, the founder and soul of the group. In a vehement statement in «The Bourg Paper», he violently expressed his grudge: «It went too far, I can no longer accept this». Phallo was leaving the group, which, after him, had become «a Likpa's den» and an «abscess of subversion». «For me, it was just a game, an outlet for the unavoidable frustrations of our urban life» or «if our music makes people become Likpa, then we must stop it». Since, Phallo founded his own group «The Sworker's Sunday», where, in a sober style, he evokes the well earned rest and distractions of the virtuous sworker after six day of swork given without counting. His most well known hits are «56 hours weekly», «au temps béni de la colonie», «the Sunday Lotery», or still «Un jour il faudra qu'il y ait la guerre», that every auditor of the telescreen knows by heart, from the constant rehearsing. This group had a little esteem success among elder people or awbosses circles, but it never sold many, despites several large advertising campains offered by Inis Financials or by the Phallocrat bank.

The come back of the Walkin'Cocks

It was soon obvious that several important members of the group had become Likpas. Rapto the Rapzoï had become a Rastalikpa, and even technicians or roadies had grown antennas or rastas! There still were numerous Phallos, and not the lesser, for instance Phallo's bass guitar was still sending the hearers into raptures, with his moving rythms. There were only three actual departures, that of the singer Phallo and two technicians. All the others, Likpas and Phallos, remained united, from friendship and shared ideal. It was the first time in the history of the town that Phallos and Likpas were freely engaged together in a common activity. They perfectly assumed this situation, showing in town bare heads, despites several editorials of «Phallo Evening» warning of the «danger» of these «mixed styles».

When they first reappeared, the bass guitar player Phallo told that «they had go through a terrible turmoil» and that «they were now feeling free». But since no member of the group never did any statement on what happened during these eighteen months.

The walkin'cocks bough a former factory hall, into the industrial zone where, it is said, was the «happiness Village» of the Great Likpa. They keep their gear here, and have their recording studios into caves, probably dug here in seach of the mythical treasure of the Great Likpa. No noise is allowed out of this place, neither sound or rumour. 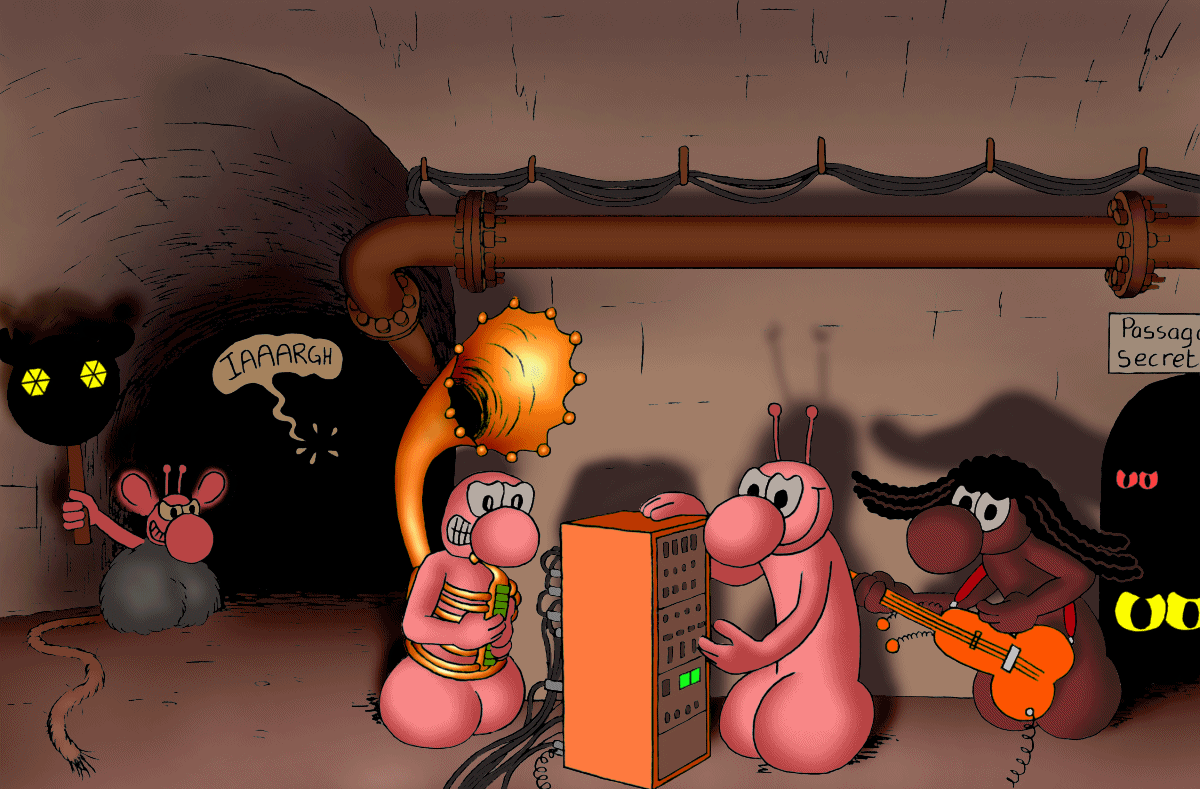 The hall of the Walkin'Cocks soon was a hangout for the youth of this disadvantadged district. In the beginning things went smoothly, but tense grew up with numerous young delinquants, Phallos or Rapzoïs. Then the Walkin'Cocks closed the hall, before the phacops took this pretext to forbid any activity in this place.

The group since had a frenzy of activity, alterning months of isolation in their studio, with times of small improvized concerts, nearby everyday, in small halls, lawns, or in nature. To go round the forbidding, the Walkin'Cocks developped a system of vans suddenly converging on one point, which allows them to start a concert in less than one minute, and to leave still faster if phacops arrive.

The new albums of the Walkin'Cocks are very different from each others, classical likrock which owed them their success, but also daring romantic or psychedelik plays. Among their most well known hits are: «The Marriage of the Likelves», «Likbubuterflies», etc.

Of course the most anti-establishment hits are regularly forbidden, such as «Beat the fascist», but the Walkin'Cocks also removed themselves from sale, without explanations, their marvelous album on Haralik, including the deeply moving «Underwater flowers». Some say that the flikpas, and even the black guards, are seeking and confiscating the rare records that fans could buy.

One of the most curious stories launched by the walkin'Cocks is that the Likpater Commandos would have musical truncheons. To show the truth of this, they published a video, said to have been shot during the night of the Dock 49, where they also recorded the famous «Beat the fascist». We clearly hear instruments sounds, bells, drums, likmaracas, synchronized with blows given in a rythmical way. It is also said that the beaten character is a Black Guard, with a belt, but nobody ever saw the non-censored version. 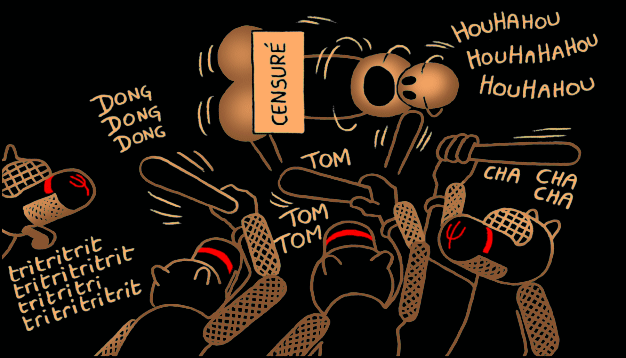 The problem is that no reliable source never came to confirm this curious statement. It must be known that the Likpater Commandos are officially illegal in the town, and as such they cannot be interviewed. In more they use to take away their preys. The fiew who could testify usually said they were hearing riinging bells in their heads. But all the Likpas who were asked started laughing, and say it is true.

Next page, stories of musician Groofios, still worse than the one of the Walkin'cocks!

The funny Music Instruments of the Gentle Likpas        Page 2